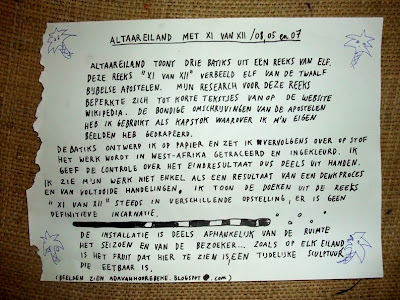 ALTAR ISLAND shows three batiks from a series of eleven.

This series  “XI from XII" depict eleven of the twelve biblical apostles. My research for this series was restricted to short texts on the apostles, found on the Wikipedia website. These brief descriptions are used as a hanger on which I drape my own images.

I design my batiks on paper and then draw them on textile. The work get traced and colored in West - Africa. In this way I give the control over the final outcome partly out of hands.

I see my artwork not only as a result of a mental process and completed actions. I show the canvases from the series' XI of XII" in different configuration, there is no definitive incarnation.

The installation is partly dependent on the space, and the season ... like on each island, the fruit shown here on the opening, is a temporary sculpture that is edible.

Until October 11, 2009, ALTAR ISLAND can be visited on the exhibition of Camille Huysmans Prize for Painting, Fabiola Zaal, Antwerp. (BE) 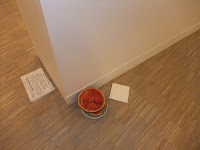 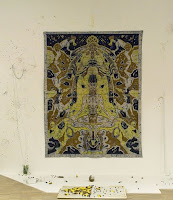